In bed after 11pm, outta bed after 8am, makes your life awesome, fun, and grand!

“Oh my god, you’re so lucky!” is the usual response I receive when I’m asked what my working hours are like. If you’re wondering what they are, the official office hours for us here at Gametize is 10:30am to 7:30pm. 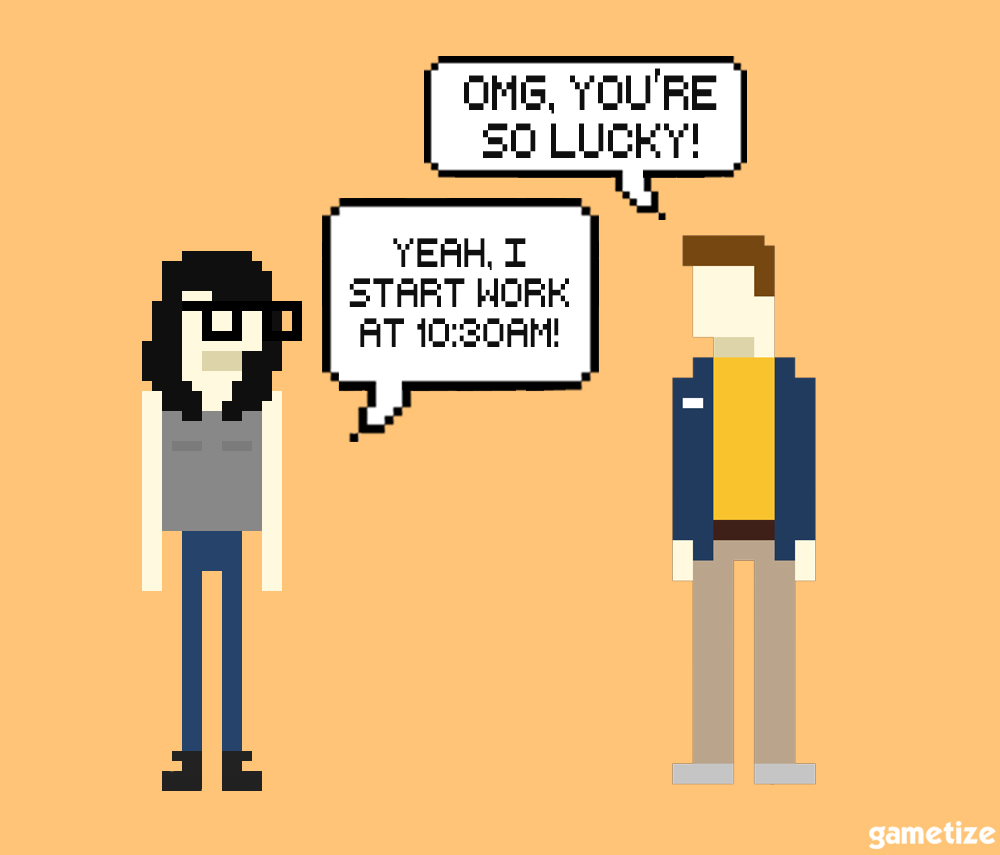 To be honest, I had my doubts about such strange working hours when I first came to Gametize: Will I be as productive if I start work so late? Will my social life suffer? What if I get accustomed to waking up late and I become a lazy slob?

Six weeks into working with Gametize, and I realise how stupid those worries are, and how many benefits I actually have from my work schedule, benefits I hadnt even thought of. 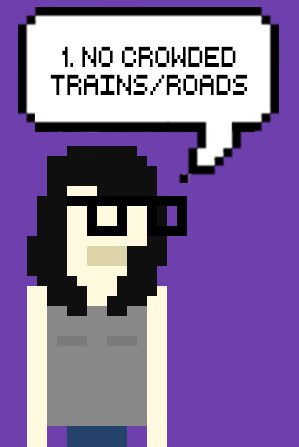 One of the first benefits I noticed, I noticed straight away on my first day of work. I get on a train at around 9:30am every day, and, by then, all the 9 – 5ers are already in their office cubicles, clacking away at their keyboards!

It is such a glorious thing, being able to take the train without having an impromptu club-grind-experience. I can stretch my arms and legs, I can bend over to tie my shoelaces, I can breathe.

Would all of this be possible with a regular 9 – 5 work schedule job? Hell to the no! 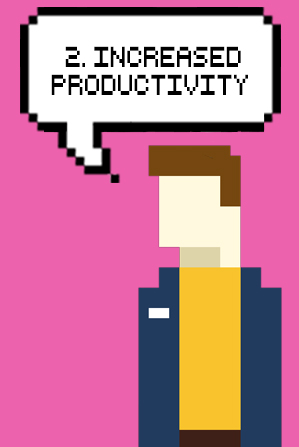 Having grown up with a Singaporean education system, I’m accustomed to waking up super-early, and starting lessons super-early as well. In Singapore, we start cramming information into our heads as early as 8:00am!

I’m used to doing that. I’m used to having to force myself to study and memorise equations and such, even when my brain is yelling at me that it can’t.

Yes, my brain yells at me that it can’t do work! And, apparently, it’s not just my brain that’s protesting, but my heart, and liver, and who knows what else.

According to Dr Paul Kelley of Oxford University and a research team at the Sleep and Circadian Institute, our body runs on this 24-hour rhythm that we cannot force through acclimatisation. By asking students and working adults to report to work before 9am, we’re actually forcing parts of our body to work two or three hours off of its 24-hour-rhythm.

That can’t be good, can it?

So you can understand my concerns when I was first told my new, unconventional work schedule at Gametize. I thought I’d already gotten used to starting work early, and that starting work late from now on was sure to mess up my productivity!

Yet, nothing could be further from the truth. If anything, my productivity’s actually improved!

Now that I’m working alongside my body’s “24-hour-rhythm”, I find myself more alert and falling sick less often. My brain no longer yells at me to take a break; instead it says, “Yeah, okay, I’m ready to work, let’s go.”

This way, I’m more focused, and I get through my tasks quicker, instead of yawning every thirty seconds, wishing I were dead. Which leads me to my third point… 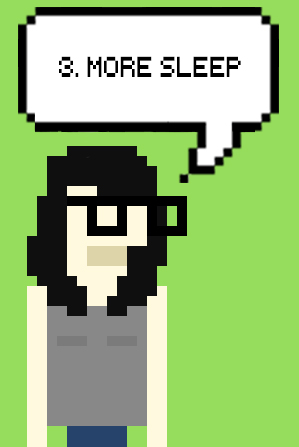 Sleep deprivation is an international problem.

We’ve all been there: it’s 7am, and we’ve got to be at school/work in two hours, and we’ve only had four hours of sleep. We crawl to our coffee pots—we don’t even bother pouring ourselves a cup, we just drink straight from the pot—and then we get dressed somehow, and we drag our feet to school/work.

At school/work, things don’t improve. We slouch over our desks, and we yawn so often our jaws are beginning to hurt, and we think to ourselves, “Someone, just kill me, please.”

I’m happy to report that in my past six weeks with a 10:30am – 7:30pm schedule, this has not happened, ever! (And, no, it’s not just because the office’s pantry is always fully-stocked with coffee!)

That still gives me eight hours of sleep.

“Oh, stop whining,” some might say. “You can still get eight hours of sleep with regular 9 – 5 work hours! You just have to go to sleep earlier!”

Oh, come on, let’s face it: nobody wants to go to sleep before 11:00pm, so if we can’t change our nightly schedules, let’s change our morning schedules and start work later.

This is when someone jumps in and says that age-old saying: “Early to bed, early to rise, makes a man healthy, wealthy, and wise”.

And it’s a saying from Benjamin Franklin, one of the Founding Fathers of the United States! It has to be true!

Sorry, Ben, but modern research has proven you wrong.

A pair of epidemiologists at Southampton University conducted a research and found that night owls (in bed only after 11:00pm, up only after 8:00am) were financially and professionally more successful than morning larks (in bed before 11:00pm, up before 8:00am).

Another research by psychologist Richard D. Roberts of the University of Sydney and Patrick C. Kyllonen of the Air Force Research Lab, found that night owls also outperformed morning larks on intelligence tests.

As of yet, there is no scientific research that says “early to bed, early to rise” really does make us healthier, wealthier, or wiser, but there are tangible results that state the opposite.

Right now, being a night owl seems like the obvious choice that people should make! But nothing’s perfect, and night owls have their flaws too: we’re more prone to substance abuse, and more prone to clinical depression. But that’s a discussion for another time (or if you’d like, you can check out this article regarding night owls and morning larks, backed up with scientific research!).

So after all’s been said and done, what’s to be done about our school/work schedules? What is the right time to start school/work?

I’m no omniscient being, and I don’t have all the answers, but as a person who’s experienced both starting work before and after 9:00am, all I can share is that I much, much prefer the latter.

3 thoughts on “In bed after 11pm, outta bed after 8am, makes your life awesome, fun, and grand!”