Guan spent the first ten years of his professional career in the MICE industry managing a host of proprietary exhibitions and conferences. Starting out selling booth spaces, sponsorships and advertising, Guan worked his way into project management and subsequently, several senior management positions. One thing that came out of the early years in exhibition sales was developing that thick skin to smile at the face of rejection. Well, sometimes it was more like trying not to lose sleep over a lost sale.

From late 2005 until 2015, Guan worked for a New York-based trade association, representing the global retail real estate business with over 110,000 members around the world, as its Managing Director for the Asia-Pacific region. Guan was responsible for opening up an office in Beijing to support the China market – the first time the organisation has had physical presence in the PRC – and staffed the office with a full-time team. All this was accomplished in a little over 7 months.

In 2017, Guan transitioned into adult education, which meant going back to school and learning (well, sometimes re-learning) skills… skills he thought he had. It was a humbling experience going through certification after certification, in order to really learn the basics of helping people develop and grow. It took hundreds of classroom hours (and two different coaching certifications) to learn how to ask questions; and hundreds more to get better at it.

Which brings us to where we are today… At Gametize. There’s a story to how Guan and Keith met. Buy either one of them a drink and you might get to hear it. 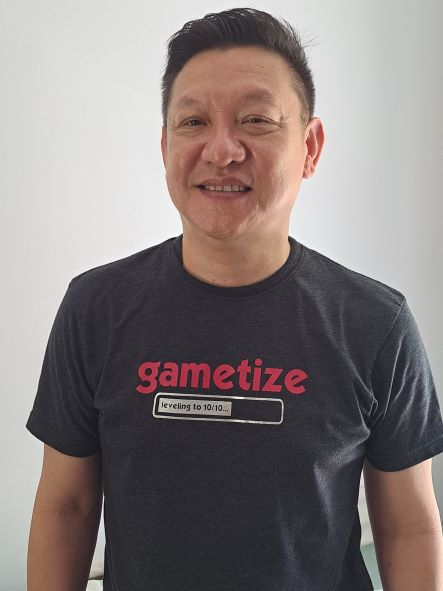 What exactly is it I do at Gametize?

In a nutshell, it’s probably to make the previous bunch of “old guys” not appear so old.

But what they actually pay me to do is to create a robust certification programme to develop and assess professional competency in gamification design. This means injecting structure, a kick-butt content delivered in a combination of asynchronous as well as face-to-face live facilitated learning platforms. To top it all off, certification wouldn’t be worth its weight in the paper it’s printed on if it doesn’t have a rigourous assessment plan.

If you want to learn more about how you can get yourself certified, write to guanheng@gametize.com

As the new resident “old guy”, I have the privilege of imparting wisdom and clarity through regular coaching sessions internally. It’s always incredibly rewarding to help a colleague grow as a professional and as a person. I’m learning a ton of new stuff too, believe me. Talk about teaching an old dog new tricks…

What matters most to me...

What Covid made me do...

It’s always a work in progress….