Introducing the Gametize 6D Playbook, our new and complete guide to gamification strategy. The transition from the 5D Framework to the 6D Playbook charts two main changes. Firstly, we have included the 6th D, Diagnose, in the post-game environment. In this phase of the Playbook, we advocate the gamification practitioner to be critical in the way one assesses and reviews the creation. There is often a tendency for the creator to “not see” aspects of their own work simply because they have spent so much time on it that they are either blinded or desensitized to any shortcomings. In their head they might have the best intentions, but what comes out at the end may fall short, and the consequences could be dire. Problems may have occurred during the pre-game planning stages (the first 4 Ds) or during the design phase (the 5th D). What we are now offering is a systematic approach, through a checklist and our very own Gametize Scorecard, to checking our own work objectively.

At a more fundamental level, calling it a Playbook, rather than a Framework suggests a more holistic approach to gamification strategy to encapsulate the entire process. We believe it needed to be extended to the post-game environment because the review and refinement process after feedback is equally critical to the game creation. There is also that change from a framework to a Playbook because it is a playbook to devise plans to counter challenges, craft strategies and employ tactics or plays to stay on top of the game. Note: We use Playbook, capital P when used as a proper noun, when referring to the 6D Playbook. We use playbook, small p here because it is used as a common noun to describe a generic playbook. We hope you’ll find the 6D Playbook as useful to you as it is to us. We use this to run our GCD sessions. You can see example of GCD here: https://docs.google.com/presentation/d/1cOki9DMXNoLFc5kYABTJnEhWTPr62qSyQv4ZhWzoBg4

Let's begin with this basic checklist...

(Though if you are already a Gametize 6D ninja, just skip this altogether and go straight to Gametize Scorecard below).

1. Define your Problem
2. Determine your goals
3. Decide target behaviours and emotions
4. Describe & profile your players
5. Design your mechanics and process
6. Diagnose and analyse your content 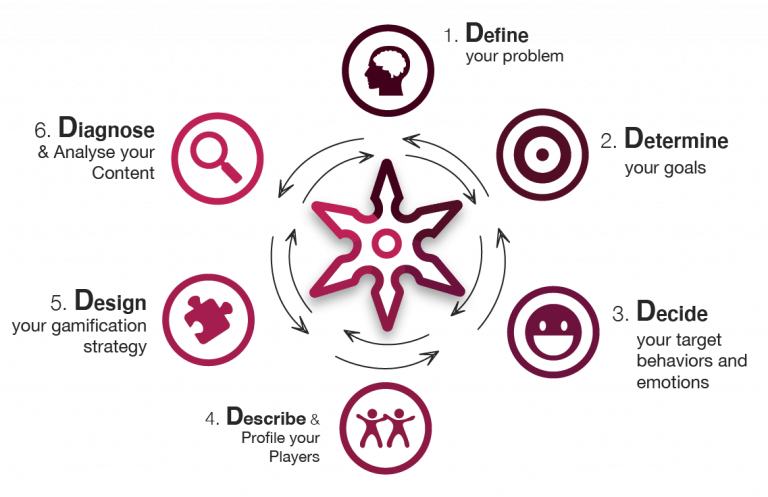 Let’s get real here: what’s bothering you that you think gamification can help with? Are you able to draw a fishbone diagram so you can figure out what are the root causes of the problem? 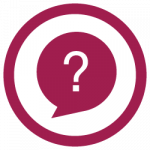 *Side note: Let’s call a spade a spade.  Don’t fall into the trap of “I don’t have a problem, I just want to make something better”. If you don’t have a problem, you are actually looking to solve nothing…you may as well put your money under your bed instead – you’ll instantly get a better ROI a year from now! Being realistic and honest is the first key step to creating a meaningful gamification campaign. You definitely aren’t doing this because it is fun or you want to make the world a better place.
Defining the problem is a critical step, and sets the tone for the entire design workflow. Don’t worry, you can always revisit and redefine it, so don’t let this intimidate you. At the same time, if the problem suffers from hygiene issues (e.g. poor retention of product knowledge because your product is designed for rocket scientists, or nobody is talking about your brand because your brand is really really bad, then maybe you should be looking to change your business!)

Once we have identified our problems, we need to seek out end goals: goals create focus and maps out the path for your strategy. Let’s talk about quantities here. Don’t fuss too much on this, and determine some numbers here that would make you a very very happy person. Make sure they are achievable! 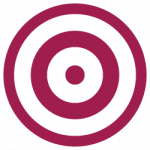 3. Decide your target behaviors and emotions

Target behavior is more qualitative and defines the types of behavior we want to see players carry out. Take for instance, exercise: when we develop a positive attitude towards exercise, it can help kick start a rewarding regime, enabling better health. What are the behaviors that can help you solve the problem, conquer the root causes, and get to the goal above? 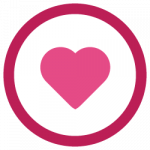 4. Describe and profile your players

This is a sample set of questions that can be adjusted to fit your context. First step for profiling is to shout out a name, say “Tony” in this case – our tribute to Ironman 🙁 (we love you 3000)
Repeat this for 2-3 profiles. Next up, establish the Player Type:

Defined by: A focus on winning, rank, and direct peer-to-peer competition

Defined by: A focus on attaining status and achievement present goals quickly and/or completely

Defined by: A focus on socializing and a drive to develop a network of friends and contacts

Defined by: A focus on exploring and a drive to discover the unknown

This is a general profiling of your target audience. Describing your players enables you to create appropriate content for your game. Ask yourself: Who are these players? What are their player types and what motivates them?

(We’ve based this off Richard Bartle’s Taxonomy of Player Types, which you can read more about here.) 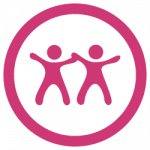 Want to learn your Player Type? Take our personality quiz!

If you’re absolutely burning with curiosity to find out which Player Type you are, take our quiz.
take personality quiz

*Side note: Do not proceed if you haven’t tackled these questions. Otherwise, well done! Now that you have these pieces of information, let’s go on to design the Gametize experience, based on the following scorecard. You don’t have to hit a perfect score, but these are questions that you should keep in mind. 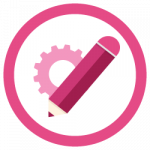 The next step involves creating an actionable plan to bring about a desired experience. Gamification is use as a tool to educate and advocate certain behaviour, which would be transformed into habits over time. We need to be clear on what we want to achieve, be laser focus and develop a zest for exploration. This sets the motivation needed to achieve.

Gamification is the adoption of game mechanics into non-game context, increasing motivation through rewards. However, for it to be truly effective, there has be strong intrinsic motivations. Gamification is an influence that promotes positive behaviour and direct attention to a cause in a good way. The 5Ds set the foundation; you create the life changing experience of your desire.
Decide what your gamification strategy will be based on:

The final step to creating your gamification plan is by diagnosing your content. Once you have crafted your game, the most important thing you can do is to review it. If possible, get beta players to test-drive your game and see what works and what doesn’t. This allows you to gain a deeper insight into your game. 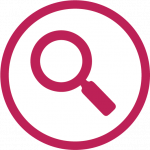 With all the feedback and data you have collected, you should then proceed to analyse them.

By analysing and making sense of these details, you are now able to refine your product for your users. Make use of the data you’ve gathered to create fresher content, a more experiential interface, and bring greater benefits to your work.

Another thing that needs diagnosing is the overall experience you had. Similar to the content portion, you should take the time to reflect and look back on the process of creating your gamified project. Were there areas that you struggled in? What did you do to resolve those issues, and what steps can you take to learn from them? When diagnosing and analysing is done correctly, it not only makes for a better game, but teaches you important skills as a creator.

Most importantly, remember that the 6D Playbook is an iterative process; there’s no such thing as a perfect gamification strategy! So if you find, for example, that your initial player profile isn’t accurate – go ahead and change it

Looks are important (at least for your gamification campaign) – additionally, having a great narrative creates cohesion and helps with immersion for your players. Take a look at Gametize’s Style List that we’ve compiled for some inspiration.

The Gametize scorecard is designed to measure the success of your gamification strategy. Score each of the questions out of 10, with 10 being the best score. 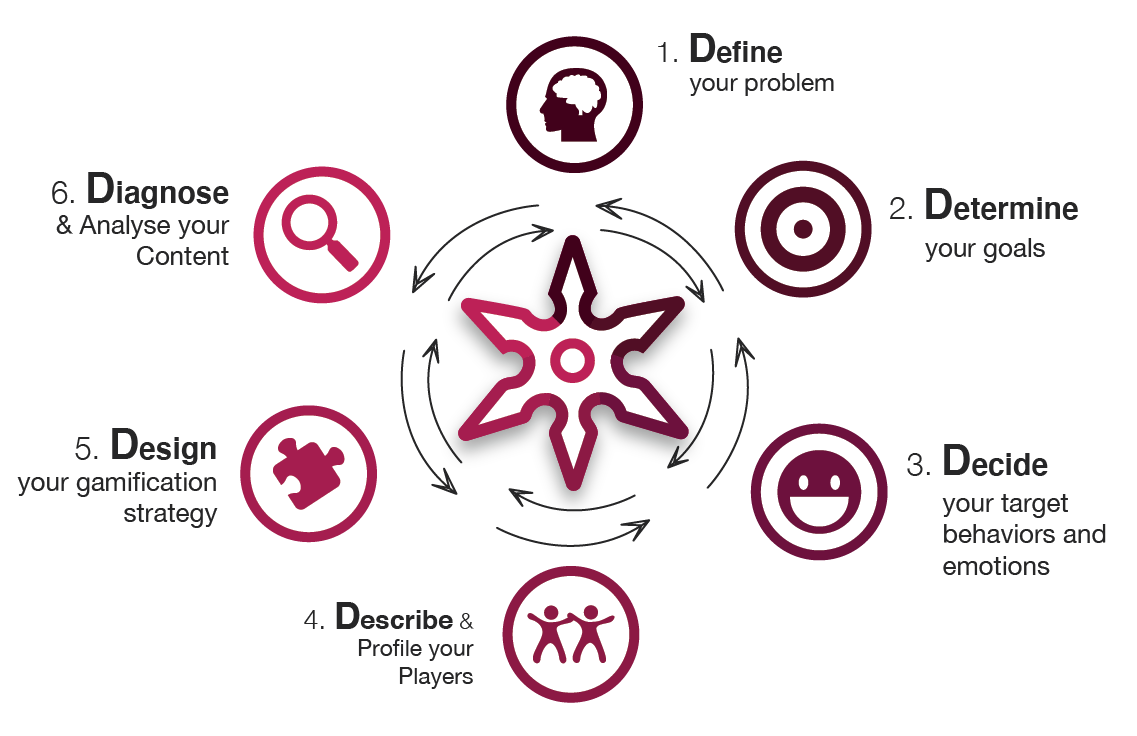 Step 1: Use the 6D Playbook 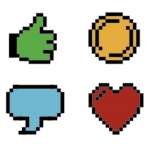 Start fleshing out the basics of your game. 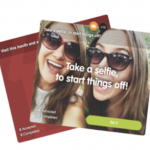 Determine the format of your Challenges. 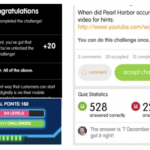 Think about the type of feedback you will offer to your Player.

What can the 6D Playbook & Scorecard be used for?

The 6D Playbook & Scorecard can be applied to a diverse set of use cases, from setting productivity goals to social relations.

Here are some examples of what we’ve used the 6D Playbook for:

And here are some examples of what we’ve seen our clients and workshop participants use the 6D Playbook for:

If you want to learn more about how to successfully implement a gamification strategy in your organization, head on to cheatsheet.gametize.com where we have a bunch of resources for you such as demo games, case studies, and other useful stuff.

Max Ang was a Business Development Mentee at Gametize in 2014. He loves reading, especially on themes that deal with the modern society. A sporty person who enjoys runs in the morning and rock climbing on the weekends.