We begin with a hard truth about gamification: success is highly dependent on design. Gartner reported that 80% of gamified apps will fail by the end of 2014. In fact, recent research showed that over US$50 billion was invested in Gamification programs in 2012, and most were unsuccessful due to the lack of use of intrinsic customer motivators. That’s an alarmingly large waste of valued resources. This has led to quick retorts and criticisms of the concept, and a few words such as “over-hyped” and “exploitationware” thrown around in heated discussions about gamification. If you think that just implementing a system where employees simply earn points can improve your workplace, think again.

When does gamification fail, and how can we avoid it?

Perhaps one of the biggest misconceptions about gamification from clients is that they believe its sole purpose is to reward users with points to keep them addicted to the product. However, this may be counter-intuitive – research has shown that the provision of extrinsic rewards can decrease a person’s intrinsic motivation to do a task (also known as the over justification effect). For instance, Nisbett and colleagues (1973) showed that interest in playing a puzzle was higher when paired with a monetary reward, but when it was removed the following day participants spent significantly less time playing it.

Let me draw upon a local example: McDonalds Singapore. If you haven’t already heard of the app, it involves an alarm clock function where users are given the opportunity to win rewards, vouchers and free food.

In the short run, customers are incentivised to use the app (which may or may not increase consumption of McD’s products; this is highly debatable). However, customers’ perspectives experience a shift, perhaps from “I like McD’s fries” to “I am using this app because I get free food”. Eventually, when the app is discontinued, the same customers will feel that there is no incentive or motivation to continue eating at McDs (because there is no more free food from using the app), and associate this lack of reward as perceived dislike.

To ensure sustained growth and returns on investment, gamification designers have to consider factors other than rewards or complementary goods, and the best motivators are intrinsic ones. As humans, our actions are driven by several factors, such as mastery of skill, competition, and social belonging, but the importance of these factors relative to each other has been debated by psychologists over the past 50 years, leading to the conceptualisation of classical theories such as Maslow’s Hierarchy of Needs, Devi and colleagues’ Self-determination Theory, and more recent ones such as Drive Theory by Dan Pink.

In this post, we will focus on the most popular motivational framework to date: Maslow’s Hierarchy of Needs. Abraham Maslow first conceptualised the Hierarchy of Needs in 1943, and today remains a popular framework in sociology, management training and higher psychology instruction. It is often presented as a five-level pyramid, with higher-level needs coming into consideration only after lower-level needs are met. Interestingly, this theory was not developed specifically for the business context (although HR managers and management consultants frequently refer to it), but rather was developed as a behavioural explanation for why people do the things they do. Additionally, Maslow never used a pyramid to describe the levels of the framework – but the shape serves as a tool to visualise the importance of lower-level factors. 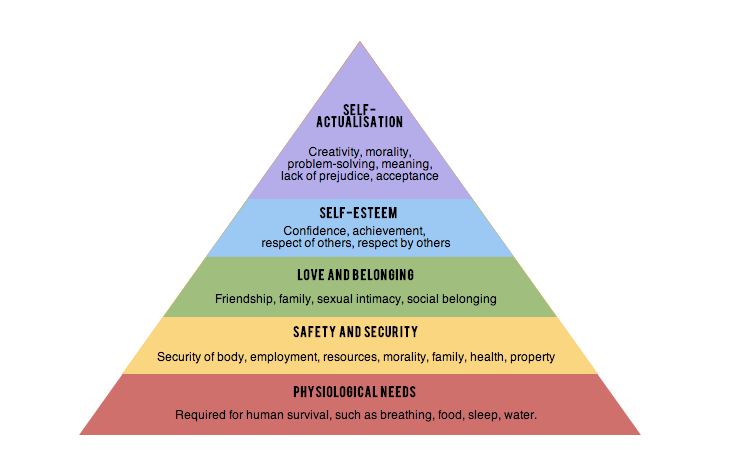 Find out more about Maslow’s Hierarchy and its constituent factors here.

Maslow’s framework was important in establishing the first steps towards the study of ‘positive qualities’ in people, during a time where psychologists were focused on treating disorders and socially perceived ‘faults’ in the mentally disabled. In fact, he basically laid the groundwork for the field of positive psychology today. However, criticisms have been raised about the framework’s hierarchal structure, as well as several lower-level factors that have been observed to be unnecessary for attainment of higher-level factors. For instance, countless individuals who have chosen to abstain from sex are still able to achieve higher-level factors, to the extent of even achieving self-actualisation.

To an extent, the hierarchy was beneficial in understanding why people chose to behave the way they do, but fails in the workplace setting due to several reasons. Firstly, not everyone is interested in career progression, and may be more comfortable with staying in the same stable environment. Secondly, some of the needs he raised are not relevant to the workplace, such as a lack of prejudice or problem solving (in certain professions). Finally, as mentioned above, there is little evidence for a hierarchal structure in management. Even in educational contexts, society has witnessed self-actualisers who have had poor security of resources or property, or people who come from extreme poverty, suggesting that some safety factors may not be as crucial as Maslow believed.

As a result, we conceptualised a holistic framework called the Intrinsic Motivational Network that attempts to capture the important aspects of motivation in the gamification context, lending key principles from contemporary theories such as Daniel Pink’s Drive, and the Self-Determination Theory by Deci and colleagues. It strips away the traditional notion of the carrot-and-stick argument and emphasises the need for focus on intrinsic factors, which will improve motivation in the long run.

Essentially, for a successful gamification system, the lower tier factors contribute more towards individual motivation. For instance, introduction of leaderboards (Tier 3: Competition) is purposeless when there is a poor environment (Need: Healthy Environment) where users can exploit bugs or cheat to reach the top, or when there is a lack of social community and belonging (Tier 1: Social Belonging). Similarly, the user should be aware of mastery content and existing badges (Tier 2: Mastery, Recognition) before they can set meaningful goals for personal growth (Tier 3: Growth). The beauty of this framework is that it is easily applied to most contexts, and that it draws parallels from the already familiar Hierarchy of Needs, taking its strengths and addressing its limitations, such as recognising the distinction between need and motivator. It also does not assume that lower levels are necessary for motivation, but acknowledges that lower levels have higher contributions to end-motivational levels.

However, like Maslow’s hierarchy, it is limited in the sense that the framework should be adjusted according to demographics. For instance, young children value social belonging, adolescents self-esteem, and young adults self-actualisation, making them of higher importance in the framework. However, this can be easily addressed by having intended participants complete a questionnaire, which will then be used to restructure the network into tiers that relate better to the target audience as a whole. Ultimately, we designed it to be dynamic in nature, where gates should be switched around and motivational factors adjusted, such that it is able to predict the best outcomes given the demographics provided.

Finally, it should be noted that this framework is a perpetual work in progress; we are constantly pitting data with and against our framework.

How does your gamification design score under our framework? Fill in the form below (takes less than 1 minute) to find out!

1 thought on “Towards a new motivational framework”